Well, apart from having a tantrum and throwing all the toys out of my pram, I did do some other stuff this week.. and one was to go to the opening of "It was all a blur"... 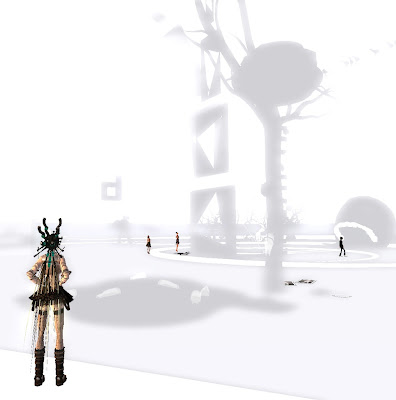 ..and it was a bit....
participating artists included....

Allegory Malaprop
Apatia Hammerer
Bryn Oh
Daelia Dollinger
Jojorunoo Runo
Juliette Westerburg
Lyndyn Tzara
Miel Nirvana
Moo Money
Note Buaku
OMGWTF Barbecue
Radio Signals
Redd Columbia
Riki Yifu
Sanura Sakai
Selavy Oh
Serj Enoch
Sienia Trevellion
Stoic Ixchel
Surrealia Anatine
Vintage McMillain,
....with Radio Signals being the mastermind behind it all, as far as I could see....but...
... you don't get to see much. Not that that is a criticism, part of the point of setting white builds against white backdrop is the way shapes etc merge. ColeMarie did some last year and I have done a white build as well, so nothing radical there. It is trendy and striking for the first few minutes, then annoying and I lost interest quite quickly, maybe I wasn't in the mood.

I have been very critical of collab builds in the past so I wouldn't want anyone to think I was singling out this build, which is obviously a lot of work and effort....but..

...a shed load of objects, distributed round a sim needs more 'glue' than just being all the same colour, in my opinion. I have always tried, as a rule, to ask the question "if you lost one item would the Whole suffer?" as a way of determining the strength of the 'glue'.... I was glad there was no theme, and I welcome the idea of 'setting a stage'....

I thoroughly enjoyed the non-art-perfomance of Big Ramer at my local sand pit. Watching a fox build a speedboat is my sort of thing.... 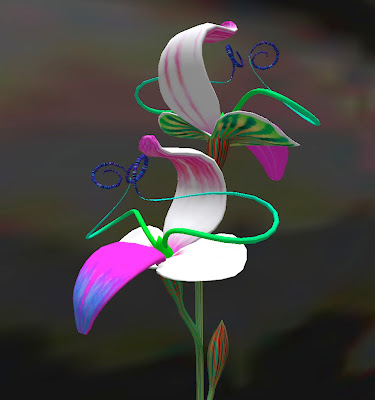 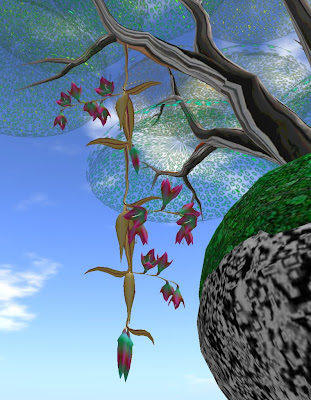 ...and the Cappuccino Vine I have rebuilt in InWorldz which is about to be pleasantly invaded by 12 sims of Elves. Elf Spirit Lands is taking on 12 'regions' which is over half a million prims......cool......more tree huggers. 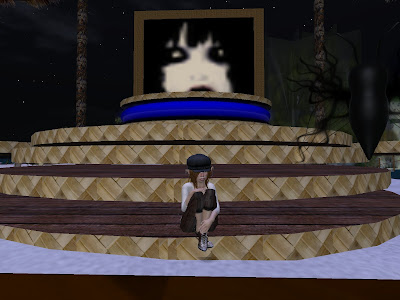 ..and the highlight of my week, tho RL dragged me kicking and screaming away (was in that sort of a mood this week) , was listening to the beautiful voice of Colemarie Soleil yesterday...sweet...

All in all, a very eventful week, and the decision to give up soror Nishi Beach was one I mulled over for a long time...still... life goes on....