Erosion of the beach... 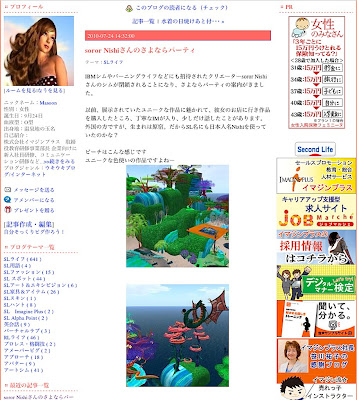 Firstly let me thank you all for your kind words, summed up in Juanita’s blog, concerning how the beach will be missed.... even in Japan??


I have to agree that losing parts of our history is always a shame, and the fact that some greater builds than mine have been lost doesn’t mean that even the smallest loss isn’t an erosion, it is.

Gardening is a bit like that, though, some plants do well and thrive over time whereas others fade quickly and we are left with just the memory and maybe a few photos. I hope, however, that what has been planted has shown what is possible, and that people who have seen the beach know, now, that stupid Photo-On-Stick trees are not the only solution to beautifying this, or any other world.

Landlords are similar in all worlds, the difference here is that no-one owns their own home, we are all renting, all tenants. In RL I spent the money I should have used to tie myself for life to a bank on airplane fuel to travel the world so I have, as a consequence, known quite a few landlords.

I have had landlords that steal from me, lie to me and those that have behaved impeccably too. One thing they do tend to have in common though is that once they have your money they are reluctant to make any improvements to the property... sound familiar?....

Just as in SL, you can’t withhold rent as you get evicted, and they don’t have to improve your place as it is actually their place... you own nothing apart from your furniture and clothes.....in SL you don’t even own those...

When I first came to SL over 3 years ago I was warned by those kind souls who showed me ‘in’ that I might lose everything as the future of SL was uncertain. I, however, was convinced then, as now, that the ‘gold’ I would carry off with me was the skills and experience I would have gained. I had not, at that time, foreseen the real gold which is, as you all know, friends.

I will not be leaving behind any friends, I’m not going anywhere, just sending my inventory up near the 20,000 mark...