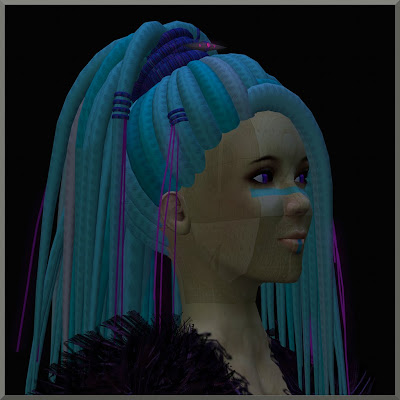 I've just read the latest offering from the Boys, their monthly update, and they really can't blog to save their lives...

There are a few things that Inara Pey has already touched on in her excellent post... here. Like the fact that we heard about the new Library Avis a week ago and that monthly news is always gonna be old news, and let's face it, old news is an oxymoron.

The new avis...well, what can I say? It would seem a bit hypocritical for me to criticise them really and I do welcome a wider range of non-human forms ... so I could just stay silent on the matter. ...but that's unlikely to happen.

The animal range I thought were probably gonna be fairly popular, after all some of my best friends are feline at times and I know great builders who are foxes.... (no dragons there I see) .... and well, we've all met a few robots in our lives tho the ones I've met have been very good builds... but.. cars?? In my 4 years in these worlds I have yet to meet a car. Maybe thats just my limited circle of friends, no balloons either.... oh well we are assured that they are:

Anyway, all this is only a minor issue compared to the most cringe-making part of the whole embarrassing post, the report that chat lag is a thing of the past.

I am used to people making false claims, just last night I saw a shampoo advert on TV claiming that the shampoo would respect my individuality, so that doesn't worry me, after all advertising=lies, for the most part. Just sign on to any medium or large Group and you will find the truth out for yourself.

No, what really worried me was the Tone. The Tone is the sort of manner and style of writing you use in a blog or advert, the Copy, and the way it is delivered..... for example:

"Here’s a little something about that right royal pain, Group Chat Lag. You know how it is: you’re inworld, having a ball chatting with a group of friends, but the chat shows up with words missing or in the wrong order. It’s like a bad roommate, always hanging around and making a mess, interrupting your conversations and ruining your jokes! Some of your friends won’t even try talking while that loser’s around, knowing that their impeccable comic timing will come out looking like free-form poetry."

"We’d say that we’ll miss the old Group Chat Lag, but that would be a total lie. Instead, as the saying used to go: “door Don’t let the hit you in the butt on the way out.”﻿

I have been lead to believe that the majority of users of Second Life are in the 30 to 70 age group, now, if that is the case, then the belief that offering them the ability to dress up like a car and then talk down to them like a 10 year old is going to endear you to your user group is so far wide of the mark that it is an embarrassment.

I am certain that the person who wrote this, the Most Dreadful Copy of the Year, has never experienced chat lag....

....and finally... the increasing attempt by LL to pull people OUT of SL via FB, Marketplace... and now Twitter....

.... as Inara Pey so rightly says..."f you really want feedback and comments on what is happening, then give us the means to do so in as quick and convenient manner as possible.

By that I mean letting us us comment on your blog posts directly. It’s the way almost every other blog in the world operates when comments and feedback are allowed – so why not you? You used to at one time, but then you moved away from this approach, almost as if you were either afraid of what we might say, or didn’t want to hear what we were saying.

But the fact is, if you really want our feedback, you really should consider making it as easy as possible for us to do so, even if it does mean opening up your blog entries for comment once more."

Well, I guess it's just another labour saving device, i.e. laziness ... but it does seem that they don't believe in VW's as much as we do ..