Now, I think I was fairly rude about AU last time round, and probably will be this time too... it’s all part of the Boys new social media dreams.

Thing is ... there are always those people who want what others have got, you know, like buying a boat because their friends bought one (I know about this cos that’s what my step father did altho he hated the sea) ... and if you see FB and G+ and Twitter all making a fortune (potentially) well...you have those people who want one too, a social media site, that is.

So...having bought AU from some lucky swedish people and, after a fairly short time, sunk the whole lot, drowning everyone onboard ... well... it’s a relaunch!

I had to go back and see what I said last time round, after all, hypocritical as I am, I don’t like to repeat myself.

I wrote the following on the 23rd September last year.... which I repost here in it's fullness...

"Also...I joined the newly acquired (by LL) Avatars United, which is a staggeringly forgettable social media site, for avatars. It has poor graphics and its hard to see it taking off to be honest. I thought...well...that's nice, this disproves my previous idea that everyone is out to get my Real Name and sell me junk.
However.....before I left the site, I was asked if I wouldn't mind answering a survey...for feedback. Now being the Public Spirited Being that I am, I agreed.
The first 3 things they wanted to know where.... age, sex, job...... now, I ask you..how is that gonna help their feedback, really. Duh!!"

Followed the following week by...

"Well, the big thing seems to be Avatars United this week, as I have more friends, suddenly, than I can shake a stick at, not that I would, of course,...... well....maybe one or two could do with a....

I am sooo bored with them both.

I figure "social media" are a bit like a faxmachine...outdated. I would rather have an IM with one person in SL than 3000 "friends" on FB, and really...AU has absolutely nothing to offer.

There are privacy issues, but my data is being mined whatever I do online, it is naive to think it isn't, so it's not that that has prompted me, just boredom with an outdated , and not very social, social setting.

Avatars United is to be erased ... announcement here.

Now, it could have been Cockup Linden or Blunder who was in charge though rumours say Moron Linden was brought in specially as a vet, but the life just ebbed out of it.

Apparently some people will miss it... takes all sorts...

Now its taken 8 months for the Boys to trash something which some poor Swedish guys (well, poor rich guys now) took 3 years to build. Was it the dodgy graphix or was it just the totally obvious fact that SL needs a social media site like an octopus needs a 9th leg.

A good part of most peoples time online, (even if they live on some high altitude building platform torturing prims as a hobby) is spent socialising. Not one but many wise Educated Types have pointed out the fact that 'face to face' interaction on SL is a million times better than any other form of virtual socialising. I guess the Boys didn't know that as they don't really go inworld except for the occasional foray.

XXLMarketplace XLonMainstreet to be the next corpse?? Probably not, some people actually use it (apparently)....less laggy than the malls I guess.... but it is being refurbished. Why does that not fill me with hope... (rhetorical, so deserves no question mark).

Avatars United was fast (8 months), easy (no-one used it) and I, at least, find it quite funny...

Will there be enough people who sign on? Probably.... Will the graphix improve? Probably not...Not sure why the Boys think that grey boring graphix is trendy. I have a tax return form which is better designed than that... 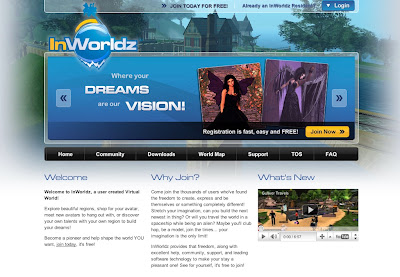 So... I am soon on more social sites than is sane ... still Google+ will delete me soon, it seems, like Opensource.... he got culled for not having a proper name... (like Google is a proper name?)...

Social media.... it's like reading a book about life instead of living it.