It's becoming obvious to me recently that it is not LL that is going to make the biggest contribution to future steps in Virtual Reality.

I am very pleased at the fact that there is basically no news coming out of the Lab, no new shining toys, no stupid 'enhancements', as it seems like Rod has got the staff (those not involved in Mesh) scrubbing out the metaphorical toilets where years of clogged crud and limescale were allowed to accumulate by the previous twat while he sought Big Business as customers and deemed our criticisms to be 'whining'.

I recently linked to the new chip Intel is producing and hardware improvements are necessary it would seem before major new steps can be taken (good policy then for the Boys to get their house in order in the meantime).

The research and development going on which will allow 1000 or more avatars on a sim is also, eventually, going to be a game-changing factor. 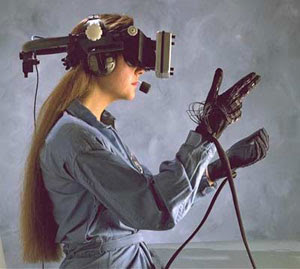 ...but will we ever sit like this in front of the screen?? ...not sure if I would enjoy that....(photo pinched from GadgetsGeekly ...here) which links to a much more comfortable concept below...

...also a pinched photo under the heading "sony is predicting a come-back for virtual reality"... here.

There is no doubt whatsoever in research and trials done in universities that this type of head mounted glasses or screen increases the feeling of Immersion (as we call it) or Presence (as the rest of the world calls it) by a huge degree.

Now while "3D" television and cinema are headache-inducing fads that come and go on a regular basis, a fuller or richer feeling of 'being there' induced by a screen you wear on your face has a great number of potential customers in Gamer cultures. We, a small band of Virtual Worlders, would benefit greatly from developments aimed at the gamer market.

So, hardware improvements are pretty core to the future of VW's along with broadband improvements, of course. While 1Gig services are currently only available in limited areas (and the whole of South Korea) ...it may not be too many years before this type of service is rolled out across the USA and Europe at an affordable price.

The increased broadband, new chips and headset could have us all in VWs while sat on the bus to work or doing the washing up.... tho I know many of you do this already via your phones, the experience would be vastly improved.

The only downside in this new utopian vision is the stranglehold the Big Boys (google, FB, etc) will have on the internet ... it'll be like living under an international dictator using terrorists and paedophiles as the reasons for restricting your access to ...well... basically, anything they don't like or doesn't pay.

Whether or not Holland, Sweden, Iceland and other enlightened countries will actually have the balls to stand up to The Patriot Act BS (as an example) and maintain net neutrality has yet to be seen. We may have to boycott US (possibly UK too) companies which would be very difficult as 'thats where the action is'.... interesting times....