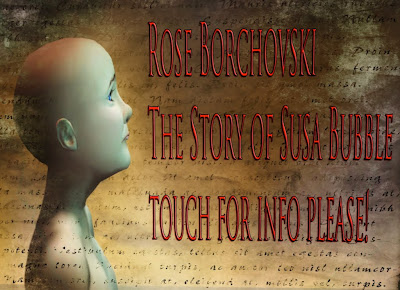 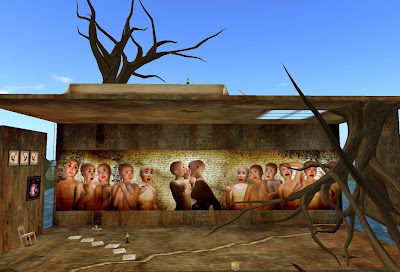 The above work is the one that got banned by the fools at SL7B...

It has now found a home at the UWA....here ...love those Australians to bits...

In a very thorough post NWN has printed out the whole letter from Peter Greenaway which is well worded, and the response from Blondin Linden which is very weak.

"I suspect you are responding to pressure, to some form of mind-police, certainly to some form of political correctness that is related to money and the slow swing to the political right that is happening all over the world related to civilisation's fear of financial insecurity. Don't go that way. You are endangering a tool that is greater than you.

If you really insist in so-called protection of innocence (and I really wonder what that really is - is it a synonym in fact for ignorance and intolerance?) then do so on a careful case by case basis with intelligence and foresight."

Now...that sentence "You are endangering a tool that is greater than you." Is probably the most astute thing I have heard said recently....and it is exactly the problem. the Boys have no idea of what SL is, because they don't use it.

"As with past Second Life birthdays, we have implemented guidelines for the SL7B event to create a celebration that can be enjoyed by as wide an audience as possible. One of these guidelines notes that the event has a General (aka PG) maturity rating, as have previous Second Life birthday celebrations. As described on the wiki, the General maturity rating includes a prohibition on nudity. All exhibitors and builders agree to adhere to the policies for the event as a condition of participation, and these guidelines are available publicly on the wiki."

..pathetic. Nudity of dolls included? what next? nudity of trees...(all trees to wear bras)?

LL has made a rod for its own back in trying to divide the world into PG, Mature, Adult, and the definitions (as predicted at the time) are impossible to define and enforce. Its a complete nightmare. Well, it was their idea.

It is this situation that causes me to doubt the ability of the LEA to change the Boys attitudes to the Arts. I do not doubt the sincerity of those on the committee, just their empowerment....

It has always been the way of power structures to use emotive causes to justify their domination and control.

Yesterday Linden Lab used SHAWN as henchman, and paedophiles as the cause....If SL had existed under McCarthy you can be 100% positive that LL would have banned the use of the colour RED in the builds. Wikipedia says... "McCarthyism is the political action of making accusations of disloyalty, subversion, or treason without proper regard for evidence."...hmmm...sounds familiar..

Now, as the boys have no balls regarding nipples, it fell to Misprint to make a statement. She did so in an artistic way which, like all good art, exposed the hypocrisy of a fascist approach to censorship ..... and I am sure she deserves an apology as does Rose. None will be forthcoming although I know the Lindens have read both this post and NWN's.

The inability to admit you are wrong is a sign of weakness, and rushing out the mesh launch to take the edge off this sorry affair is gonna help as much as the feeble voice morphing does to cure the woes of Viewer 2.0...

Boys, this is a "a tool that is greater than you" and, if you piss it up against the wall chasing some Holy Grail of Mass Membership.... you will lose it.

We, the creators, are portable, you aren't.