This is what SL asks me when I log in, as a pretext to getting me to go to Marketplace and buying an inventory organiser...but PLLEEAASSEE... I just want to complete the sentence like this.... "Can't find your favourite hair? then you must be a bit stupid.. after all it's most likely on your head, or in that bloody terrible folder that Viewer 2 gave you without asking, called Current Outfit, which for reasons only an idiot would understand is not in the Clothes folder where it should be. (If you are a semi intelligent person and haven't downloaded Viewer 2 then that folder will be empty for ever anyway).

If you can't find your favourite hair then any number of Inventory Organisers isn't going to help you because you will lose the organiser in your inventory before you get organised.

The other stupid invitation I have been getting from the marketing geniuses at the Lab is the suggestion, implied I know, that after Christmas my shape may need changing. I am supposed to infer that I have over-eaten over the festive season and a trip to Marketplace to get a new shape would be a good idea. Is this supposed to be amusing? If it is, it doesn't quite work ...I have only to click on Appearance anyway, so the joke, if it's meant to be one, is more than a little tame. I think they've been watching too much TV... they'll be suggesting I go to the Marketplace to book my holidays next... 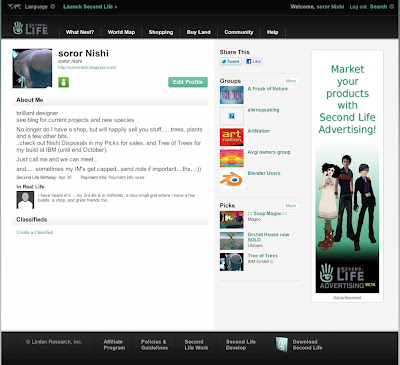 Firestorm, released today, and not usable in other grids so far, has No Advertising on the splash screen and no banner ad on my profile which pleases me greatly.

Firestorm gets the thumbs up from Wizzy who has been running, I haven't yet... been busy...:))