I nearly put my socks in the dishwasher this morning while making coffee as I was mulling over the Alchemical significance of The Wedding, specifically Chymical Wedding of Christian Rosenkreutz....

On a more mundane scale I was pleased to see that Kate wasn't wearing a terrible creation like Diana's wedding dress, an outfit so poorly designed it could only have been worn in the 80's, but the Principle Bridesmaid Pippa was the best dressed person there... well, it's all a matter of taste [I feel strange agreeing with The mail on this]. My fashion sense isn't mainstream enough for me to even blog about it .... I'll leave that to the Normal People.

Nor was I musing about why Harry hadn't got a decent AO and walked like a noob ... I was musing on the trees.

For those of you who have escaped seeing the TV or newspaper images, the Abbey was decorated, in part, with trees...[eight 20 foot maple trees] to very good effect. The Tree, both Philosophical and natural was inspirational, instrumental, in the design of the load-bearing columns of this, and probably most, buildings..... but introducing them again into this most prim-heavy of structures was a triumph of the subconscious. 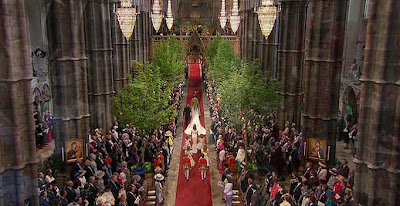 No matter what conscious reasons we have for employing an archetype in our everyday existence, the subconscious which is both older and wiser than the conscious mind is the instigator of design inspiration ("making decisions").

The act of bringing the Tree into the House has it's origins in pagan tradition, even preceding the Alchemical era, as the Tree housed gods in a pantheistic world view ..... still maintained by many to this day. 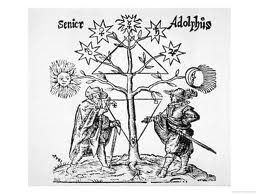 So, the whole effect was to stir both pagan and Alchemical images in a day devoted to the synthesis of prince and princess, watched by millions. The universal power of this archetype (the Royal Wedding) is confirmed factually by the number of people who watched it, by the power this still holds in the collective unconscious, and always will do.

It wasn't a day to explore the problem with the institution of marriage, namely that the Individual can get smothered by the needs/demands of The Couple.

The need for Antithesis to balance the Synthesis on the path to self-knowledge is a chat to be had after the Great Romantic Love PR machine is finished and gone to bed.

Email ThisBlogThis!Share to TwitterShare to FacebookShare to Pinterest
Labels: a roaring trade in trees, Archetypes, Jung, Synthesis and Antithesis, The Philosophical Tree, Wedding