Well, as you may have noticed I have been slacking on the blogfront this week, using my PC opportunity to fill my shop in Inworldz which I will tell you more about at a later time...

It was Just a week ago that The UWA had its Grand Finale, the results of the prize giving are well documented here. There is also the transcript from the speech by Lumiere Noir which raised the interesting point that Time is necessary for art to be perceived as 'Great' and VW's are still new borns babes.

We are all, I guess very happy to hear that this is not the end of UWA's involvement in the arts...

"What comes next?
Now, what is there to take over at UWA? Well, I (Jayjay) won't have a notecard to distribute for a few weeks yet, but basically once the curtain comes down today, the UWA 3D Open Art Challenge (L$1,000,000 Prize Pool), which again will run for one year will kick off. This will be a Grand Collaboration among the major art houses of SL, and aside from the top 3 monthly awards, in place of the Honourable Mention Awards, we will have a monthly:
a Pirats Prize (selected by Merlina Rokocoko & Newbab Zsigmond),
an Odyssey Prize (selected by Fau Ferdinand & Lizsolo Mathilde),
an SL Arts Prize (selected by Gleman Jun & Sunset Quinnell),
a Show & Tell Prize (selected by Florenze Kerensky & Barney Boomslang),
a CARP Prize (selected by Josina Burgess & Velazquez Bonetto) and
a BOSL Prize (selected by Frolic Mills & Giela Delpaso).

The rules for this will be simple. The theme is 'Create something that will take our breath away', and the prim limit is 100! As it always has been. So anyway, the receiver for the works is in the same location as before !"

....and Quadrapop (welcome to InWorldz!), who has worked tirelessly alongside Jayjay as curator will pass the reins over to FreeWee Ling who will be the new curator... some lovely words from FreeWee here..... far too modest, FreeWee is a talented artist with a great sense of humour.

The huge theatre there at Winthrop will be curated by Chantal Harvey, the machinimist extraordinaire, so that is in very safe hands too. 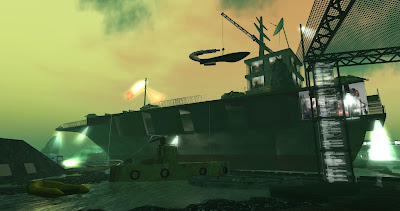 Then there was Igor and others at the UTSA build, a huge show with many artists contributing pieces on rafts. Very much worth a visit. Make sure you take time to walk along the walkways as thats where you get the experience...it's here.


Then, the mesh trials started..... and there have been numerous accounts, tho nothing really very definitive. Some crashing, some texturing probs and some old Macs not being able to access the trial grid. It's too early yet to know now it's gonna go, but the eager are experimenting. I have also heard and actually seen a 64x64x64 cube made on the trial grid.
Whether or not the buzz will be enough to encourage people to use the Hated Viewer is questionable, but expect the mesh possibilities to come to Open Sim and TPV very quickly, it's still heralded as the Best Thing Ever.


Educators are meanwhile talking about mass-migration...here... with some setting up their grids already...like New Zealand, pointed out by Pathfinder. It seems most likely tho that the exodus will happen gradually with people getting their alternative worlds in place over the next 6 months before jumping ship.... just like me and some of my friends.

Yesterday saw ColeMarie Soleil putting together a video for the Burn 2 show which opens today..

....but runs for just 8 days...something I have never been able to understand really.

Its not the only short show, but, really, when artists have gone to so much trouble.... surely a week more would't hurt.


..and for those of you that can't stand the lag, and missed his first showing of it, Storm Cells is gonna be here, for a short time...

Thanks to Mab MacMoragh for letting me install "Storm Cells" for the purposes of documentation. I invite you to visit the installation while it exists. (It won't be for long.)

Each "cell" is reacting with color and position to the density of the SL clouds in the sky at its x,y position. The result is an undulating, color shifting landscape changing with one of the basic SL natural force."

Email ThisBlogThis!Share to TwitterShare to FacebookShare to Pinterest
Labels: all sorts.