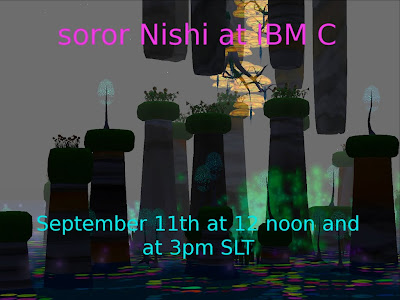 Tasty Hax will be the first DJ to open at noon SLT
...thanks to her for filling a gap while DoubleDown Tandino has a chance to get some lunch before ...

DD Tandino will play from 1pm til 2pm...and then time for me to get some supper before....

The Born Again Pagans will play live at 3 pm SLT.

In other me, me, me news... a very nice article by Thirza Ember..
Arbor virtualis: trees of soror Nishi.
Thirza also did a great post about Aliz.

Other gossip is that Eshi Otawara has been banned "it's all my own fault"... no more details as yet...

...and Philip says very little in a recent interview ..We're really regarding the situation as serious," Rosedale said. "We've got a lot more work to do." bla bla bla...

...and the Hair Fair gets a lot of criticism, not by me this time...tho it sounds horrible....here.

...and as emerald becomes illegal... a new Viewer....god...I think a post is brewing... this one is a tuna-based one called Dolphin, still, not as badly named as Phoenix (cringe)... I think its by the Cool Viewer guy, but really I have no idea, I just can't keep up.....and I'm not the only one.

oh well, no accounting for taste.

Email ThisBlogThis!Share to TwitterShare to FacebookShare to Pinterest
Labels: can't be bothered with all these labels today