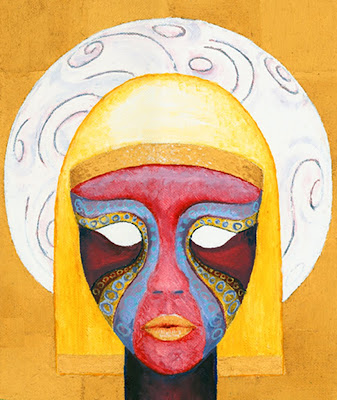 Well, I have used this time of year to bring to mind the fact that Christianity is guilty of an active political cover-up of the initial meaning of the festivities which normally, (i.e. before Christianity gained a widespread following) would have been associated with this time of the year.

As I was at pains to point out in an old blog... “Mary had a baby boy”... the Goddess, from even before Isis, was the ultimate creator of life and the only one who could get us out of this “dying world” pickle at this dark time of the year.

The exploits of the god boys I gave a slightly less intellectual treatment last year....sorry.

The question, or rather phenomenon of the Black Madonna is, however, good to call to mind at this time of year. The lilly-white Virgin does as much harm as good to women, I think, being a ridiculously weak and pious archetype for anyone in their right mind to look up to.

The Black Madonna, and I am not talking about a racially, African/Asian, whatever, different type of female but a black Madonna in the same way that Kali, the Indian goddess is black. I mean black black ... (though probably the RL Mary wasn't that fair skinned either.)..

Kali is a great archetype, being the goddess of creation and destruction. She wears a necklace of skulls and is happy to lead troops into battle... now that’s no wimpy simpering girl.

There are about 500 Black Madonnas found throughout Europe, mostly created around 11th to 15th centuries before the male church got the right hump and started calling strong women ‘witches’. The black colour usually, from a Jungian perspective, denotes an inhabitant of the realms of the unconscious, the night, and as such, by her colour, makes it clear she is not to be confused with real bio-women.... she is a Force of Nature.. and a magician.

There is a certain sexuality connected to the Black Madonna which, of course, the male church was very unhappy about, but, as an archetype she was impossible to eradicate. So, they survived, the various depictions, reminiscent of a time when women were given their rightful place as equal to, and superior to (in some arts) men in a more natural and creative society.

So....drink a toast to the Black Madonna too this Yuletide, the lilly-white wimp gets more than enough praise.