In a parallel universe I could be stuck in the snow in my car on the way to a closed airport where I could wait for a day or two in misery for my flight to Marrakech but instead I'm at home, warm and well fed.

It's interesting how fate twists and turns, like the weather. This our second RL snow fall before Xmas, and quite unusual, and another reason why you'll find no snow on my sim. I'm not a great fan. Give me coral sands, green coconut juice and a Thai curry while I gaze out over turquoise seas...*sigh*..

Meanwhile back in the Real (virtual) World I have been making an InWorldz version of the Tree of Light, as pictured below.. 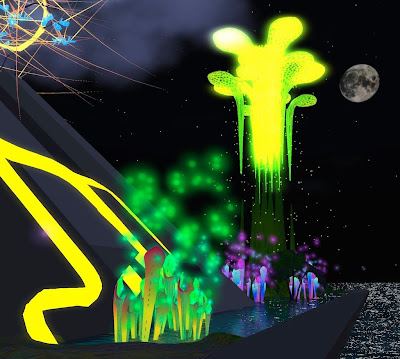 It is one (of many) of my trees that looks best as a forest or copse....so it may well get moved...

Meandering around in my brain today is this whole question of 'growth', after reading Botgirls post about how the numbers of people using VWs hasn't grown. She argues, eloquently, for the introduction of a browser-based strategy linked to social media in order to get the growth of VWs back on track.

I think that LL is fully committed to this and it's only a question of time. All LL's recent changes have been pointing in that direction, and I have no doubt that the investors are all hungry for the advertising revenue that will provide.

Now, I have to ask, as it is natural to see the world from my own vantage point..."How will that effect me?"...

As far as I can see this very strategy has already had a negative effect on the development of the platform.... specifically in this way.....Tools... As the realisation dawned that a very small percentage of the computer-using public had computers good enough to access SL/VWs, development was frozen on the expansion of the tools provided for inworld creation.

As an example.. it took Imprudence to include Torley's windlight settings as standard, and Qarl's prim alignment tool was only available once he had left LL. For those that would argue that Mesh Is The New Saviour, recent SLikileaks tells us that mesh will be 'trottled'...i.e. less animated....details here.... sensible, but another limitation to the animation of mesh, which, as we know will not be flexible.

Chat may eventually get sorted in the new year, after 3 or more years of people complaining.... not strictly a building tool, I admit, but surely one of the things that would have been sorted if the platform was uppermost in anyone's mind.

Well, no point in me going on and listing all the broken stuff, everyone knows that. My point is that instead of making SL better and better, all activity has been directed into making SL bigger and bigger.

I don't think this has been to my benefit.

I don't see that putting another million users onto a broken or fractured grid is going to improve my life either. Casual users aren't going to buy stuff, so there won't be benefits for most businesses, except advertising of course.

...which leads me to the Cyber Bunny Wars... fully outlined in Tateru's post .... we have the Big Boys (or girls in this case apparently) fighting tooth and nail for market share. As in the high street, small shop owners have withered and died as the huge Malls take a higher and higher percentage of all consumption... this will be encouraged and promoted by the Lab too.

The idea that music events would have greater attendance is dependent on a sim being able to carry more than 20 people before the lag sinks all activity in syrup. ....which incidentally is something that InWorldz (barely 18 months old) is already ahead of LL on.... along with better building tools.

So my argument with LL is bigger is an illusion, you need to be better first.

I don't expect anyone is listening..... or if they are, they have already committed to a plan for the future which permits no U turn.