Some Thoughts on the New Basic Viewer.

In a committed attempt to improve Noob experience the Boys have released the New Basic Viewer, as Tateru says.."from its first development build to a live beta in just one day, apparently with its basic bugs still intact."

I groaned. Those that do not learn from history are, of course, doomed to repeat it. The V2 ("spewer" as Brinda calls it) is apparently just about usable, 12 months after it was released.... the same could well happen here....(that it takes 12 months of frustration to get the bugs out.)

[ a brief aside here... I have read a number of V2 supporters argue the following line..; "people are still criticising V2 without realising that V2 can now be customised to make it very like the 1.XX viewer, so their continued dislike is unfounded."
There is a basic flaw in logic here.... I don't go buy a Ford and try to make it look like a Nissan. I buy a Nissan....(well.. I wouldn't drive either, but the logic is correct)]

To get this very clear from the beginning... I have nothing against a slimmed down version of the UI... IF IT WORKS. 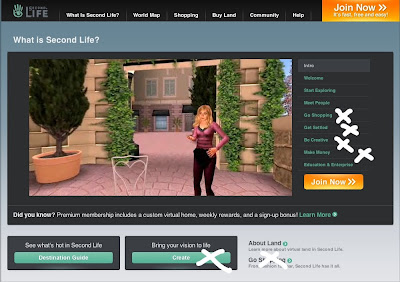 ...and the very well mannered and intelligent comments on the new civilized forum are...here.

I have still a few basic reservations... based on my own Noob experience, a long time ago, granted... namely... I had no problems with the UI. I clicked Chat to chat (it used to work), Search to search (yes, it used to work), and Fly to fly. I did not think to myself, wow, that was difficult, glad I mastered that! My Inventory held my stuff and my Friends list worked mostly (at times it didn't.... I remember, with affection, that it said, instead of ???, "Hippos"... which I loved), and the map was useful. No problem as far as I could make out.

Now, if it is believed that user retention will be improved thro having no Inventory, no money, no photography, no map, no LMs...etc... well, we will see, as I am want to say. I have my doubts, but then I usually do.

The combination of a poor and limited representation of SL thro this new viewer, with very limited clothing, (no shopping), combined with Facebook pages, seems to be the New Idea for improving SL. It does zero for me, personally. Neither 500,000 Facebook 'likes' and prods, nor a million non-spending noobs is gonna help the economy and, thereby, justify the 1300% price differential between SL and Iwz.

This has absolutely nothing to do with a reluctance to see change happen because this has to do with policy decisions being made which have no positive effect on me. I am the customer. I am always right... as you are, of course, Dear Reader.

I thoroughly recommend Botgirl's recent posts tracking the source of (SL) consumer dissatisfaction.. here... and hope she continues this meme. She is charting the Fall as Lalo charted the Rise of Second Life... they should do a book together...you know the title...

Anyway... anyone who downloads the V2 will automatically get the new Basic Viewer too, so many will have a chance to try it.

I hope the time spent developing it has not meant that repairing Chat or Search has been delayed....