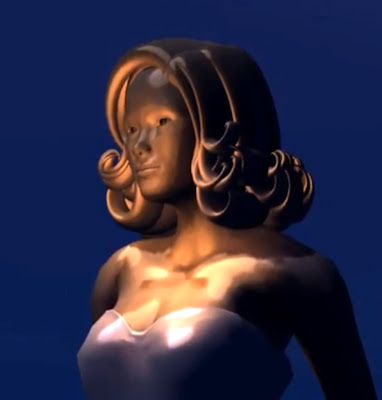 This is Madam Mesh, she’s a part of the recent announcement of an announcement which the Lab has issued to take your minds off the fact that things are falling apart currently (see previous post).

Now, as in 2008, when flexible prims were a faint possibility, I would certainly welcome mesh imports to Second Life, but I am not quite euphoric as some of my fellow bloggers for a number of reasons.

I am not worried about competition, pirated stuff, any of those things, I am simply wary.

I am mystified by a number of things (nothing new there then), the first being why, as a presentation, Madam Mesh is rolled out (the bug-eyed monsters I welcome with open arms).

She will never take off in SL, she is a dodo, extinct before she starts.

" Each mesh will consist of five component meshes: four for different Levels Of Detail and one for collisions (for Havok).
Levels of detail will be needed for each object, as they cannot be generated on the fly (as they are with sculpted prims). This means modelers will need to create four versions of the same object. Starting with the most detailed version of the asset, each decrement will need to consist of around a 50% less polygons than the previous level. These levels of detail can technically be generated by the Second Life client’s mesh import tools, but this takes exact control out of the hands of the user.” [From the blog post by Sand castle Studios, as are all the subsequent quotes.]

Maya is a very expensive piece of software and I don’t expect these things to be cheap.

OK, and the next thing that mystifies me is ...do they really think any female in SL is gonna wear hair that looks like its been carved out of concrete?? I mean.... haven’t they heard of conditioner?

Our avatars are already mesh imports ..why present Madame Mesh as an example of the wonders of mesh? Any single one of my friends dresses better than that.

...and, Boys, don’t talk to me about ARC (avatar rendering cost), I am not dressing down for anyone. I pay my Membership ... you sort out the servers, don’t ask me to look crap so you have an easier life....

Madam Mesh is an avatar from another game, she doesn’t belong here, and will never sell, why drag her out now?


I have more than one question about textures too. Texturing a mesh, which can be as big as 25x15x30, is that supposed to be done with a 1024x1024? it will look crap. Imagine an texturing an octopus.... This will do nothing to increase the resolution of SL unless they allow 2048x2048 on meshes...

" Meshes will need specifically made textures." ... that means none of the textures currently in world, in our inventories, will be of any use at all.... and from what I currently know about texturing in Blender it’s bloody complicated.

" Like other in-world objects, mesh objects will have an associated prim cost.  The prim count of mesh objects is determined by the file size of the highest level of detail, or the physics cost, whichever is higher.
As it stands, the mesh economy is governed by virtual prim count associated with each mesh object. This prim count is based on the storage (memory) size of a given object, a rough translation being the higher amount of polygons an object consists of, the greater its prim count will be. However, other aspects of a mesh object can also play a role in its associated storage size, such as smooth versus hard-edged normals. There is a hard limit of ~60k polygons per mesh object, although such an object would cost a great deal of prims."

So... if you thought one mesh = one prim, you are wrong. one mesh=X prims, X being a number the Lab will decide.

Now, I have seen written countless times that mesh imports are gonna reduce lag. The argument goes like this.... one mesh replaces many prims, therefore, less prims = less lag. This argument exactly is the one that is rejected when applied to megas.... one 30x30x1 mega prim = 9 standard prims. So...why is this argument being rolled out now??

So...only time will tell, firstly if they can solve the texturing problem, how expensive they are, and how much lag they make... and secondly if it's a good enough reason for people to use the Infuriating viewer. The other viewers will not be able to import em, as far as I understand.

Will it be a Mass Mesh Mash-up?

Email ThisBlogThis!Share to TwitterShare to FacebookShare to Pinterest
Labels: Mesh in SL.