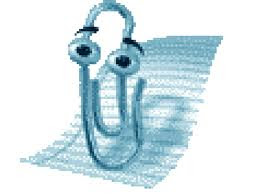 Rumours, via Tateru, that Microsoft are looking to buy out the Boys and become our new Lords and Masters have spawned a whole heap of very amusing stuff. Apart from Crap's blog there have been a load of jokes centred around Clippy, the most hated feature ever to have been invented (according to me) or ever likely to be invented in the whole of human existence.

Clippy Linden is now the subject of a number of really good Tweets, his basic saying (for those ignorant of it) was..."bla, bla, do you need help with that?"

#ClippyLinden says "i see you're trying to lose some inventory items, would you like help with that?" from Oh Mead HBH.

#ClippyLinden says "I see you're trying to cross sim lines smoothly. Would you like some help laughing at you while you try that?" m_ethaniel

#ClippyLinden It looks like you're trying to lay off 1/3 of your staff. Would you like help with crushing peoples' hopes and dreams? zero.

#ClippyLinden It looks like you're trying to search for something. Would you like some help realising how futile that is? aliceinthenet.

I'm not sure "micro" and "soft" would go over very well in Zindra... #IfMSoftBoughtLL from Lalo_T