...no...not the name of a new viewer, I just thought it had been a while since I had written some tosh. Not wanting my poor reader to suffer withdrawal symptoms, I thought to rectify the deficit with the further ramblings of a demented soul....

Well, firstly, to catch up on my own press... I have to mention some very kind words by Lalo, Chestnut and thanks to Brinda for the links and the many friends who twittered.

I need also to mention Loquacia Loon and Chimera Lemon among many others who have taken some great shots of Tree of Trees.

Moving on..... I could rant a little about LL's Destination Guide and how once again we are required to do their work for them because they are too demented to do it themselves, but, I won't even mention it.

Instead I'd like to point you at Tateru Nino who writes a very good blog, and this one in response to the ongoing nauseous Fast Easy Fun mantra of the esteemed leader of this weird sect of ours who suggests that SL should be like the iPhone... very funny and true...

..".Safety-scissors and glitter are all very well for some people and will do everything that they ever want to do (so long as it’s sparkly and gets all over the carpet). Give me some power-tools, and lock up your grandkids, because I want to do more, even if I have to read a bunch of books, experiment for weeks, cuss at the screen and feel like I’m not making any progress. Because that’s what usually happens when we’re trying to learn something completely new, yes?".... exactly, I could not have put it half as clearly.

Now this particular idea, that it has to be easy so more people will stay, is such patent crap. In 2 years FarmVille will have been forgotten, like Friends Reunited and Avatars United, fax machines and punch-card operators, what we need is an INCREASE in technology. I can get a new graphics card if its worth it, and if I don't know how to fit one, I will learn.

There is no point in SL reverting to a handwritten letter exchange penned with quill and ink just because it is easy. "Safety sissors and glitter" says it all.

The degree to which the Boys are "listening" to us "residents" (god , I cringe every time I write that word... I don't live in SL, I don't own anything in SL, I simply rent server services.... I'm a client.)...anyway... if they are "listening" they will notice how many people are now getting worried about Display Names, and they will drop the whole idea. The "community" (cringe factor 9) is not prepared to take the risk, period. Alex has written three posts on the subject, starting here.

....and the Viewer saga rambles on, everyone asking everyone which viewer to use and the elephant in the room, the unasked question is..."why, oh why, oh why did the Boys release a viewer which needs at least another 6 months development before it is even remotely usable" ... it has done more to depress the new-user experience than any griefer freenis attack could ever do.

Anyway, to move on to more pleasant subjects... Botgirl, and Nightflower (and possibly Nightfire) are working on a great new video/machinima ...teasing taster here. That is yet another blog I will be following...(47th...it's a busy thing this blogosphere)...

Miso kinda got forgotten in my annoyance over Crap Speaking (not an avi) at the Pop Art lab opening. In fact there is a wealth of stuff there and Miso's particular build is layer upon layer of meaning and symbolism relating to our 'place' in the scheme of things, digitally and genetically. She has taken time to explain her thoughts in her blog, and, its a guide, really, to her build..... here. 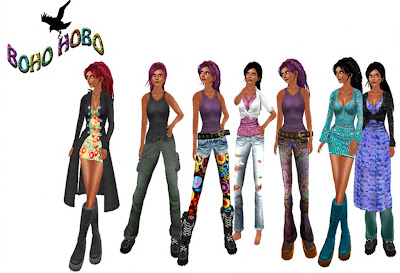 In InWorldz news...well.. on the positive side, BoHo HoBo Fashions, courtesy of Trill have arrived, her new shop is at West Artlandia 62/237/22. So you don't have to look like a hooker or your mother anymore... it's all good.

...anyway, I'm bored writing this now, I want to get inworld and you are probably bored reading it...so...til the next thrilling instalment of the great soap opera we call .... hmmmm

Email ThisBlogThis!Share to TwitterShare to FacebookShare to Pinterest
Labels: more tags than you can shake a stick at...