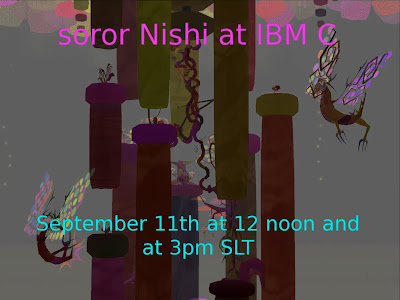 There’s a thing about nature that I have been trying to express these last three years that is intrinsic to the way nature works.

Nature is economical. It takes matter and sculpts it in the most efficient manner to suit its ends.

Johann Wolfgang Goethe wrote a book in 1790 called The Metamorphosis of Plants, in it he points out how a stem is basically a transformed leaf, as is a petal, as is a root. The basic unit of the plant is simply metamorphosed into different ‘organs’ by, as we now know, a fairly mathematical process of the changing shape and nature of the unit cell.

This process is almost identical to the one I use in Blender. I can only do one thing in Blender, namely change the distance between vertices.

In plants this is called homology and has a lot to do with why my plants in SL look as they do. All my plants have evolved in this manner from a single group of vertices in a Blender file: this is Virtual Homology.

The prim as Increatum was very much the basis of my build at Magoo last year and this subject of homology has been in my mind a lot as I have been building IBM.

This build is an attempt to condense my last three years work in Second Life into an experience which demonstrates my vision of landscaping in virtual worlds.

All 11k prims are sculpties I have made in Blender and coloured with textures which started life as paintings.

I think of myself more as a landscape artist but had to first make the plants and other pieces as there were no satisfactory elements in SL for me to use.

I am very grateful to IBM for their generosity and particularly to Tezcatlipoca Bisiani for making this such an easy thing to arrange."

..at around 300 meters I have rezzed a little home. It is a sample of the type of building I would imagine avatars inhabiting rather than poor copies of RL houses. My reasons for the general dislike I have of current SL architecture I have given voice to previously.


Look forward to seeing you there...