Aliz and a dance

Aliz has a new show.. and I particularly like her new Pink Piece, its the sort of art that is going eventually to be seen and recognised (for those that are into that sort of fame) as being unique to Virtual Worlds, simply cos you can't make this at home with some egg cartons and an empty washing-up liquid bottle.

It is worth a visit, as usual.

I did fly around the sim as she recommended but I just get annoyed (surprised?) by this methodical building of RL Architecture and imitation RL... its such a painful waste of prims, seen from my view point.

RANT WARNING....There is a direct correlation between EASE and QUALITY, that is to say...the easier something is to do, the more people do it indiscriminately..... and quality goes thro the floor....
For example...... before printing....only books that were worth copying by hand were copied...the effort involved was major....now I get spam of such inane quality...lol
Music..... now everyone can make crap on their computers at home, the world is drowning in dodgy efforts (which is OK for the most part cos I don't have to listen to it)...
BUT... as it is very easy to build in SL ...well...lots of prims get turned into poor copies of RL objects, which I do have to live with and Galleries get filled with photographs that should never have seen the light of day..:))))
Of course....I am just teasing ..(?).... its great on the other hand that everyone has a go at something creative...:))).... its just that a lot of the products of this endeavour would be better composted on a great prim compost heap. 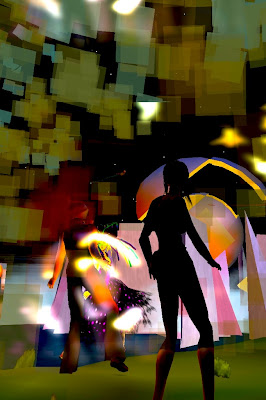 Got out for a dance too, yesterday, for the first time for (seems like ) ages... at Eifachfilm Vacirca's build....I went simply cos it was called Fruit Penetration... didn't find any fruit, and luckily (unfortunately??) no penetration...but

Email ThisBlogThis!Share to TwitterShare to FacebookShare to Pinterest
Labels: A day in SL