Blogger made a big cock-up, and admitted to it which actually impressed me quite a bit... so you may have had trouble reading my previous post. I know Miso's piece "Miso and the Wolf" went AWOL for a while....

...in other news... made a new tree for UWA and, of course, anyone else that wants one.... not quite got round to putting it for sale yet. 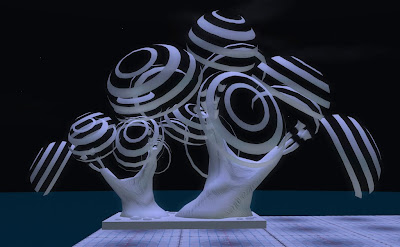 ...in other news I am helping Allure Magazine with some graphics and photos, hopefully.... it's a new InWorldz magazine and there's a lot to sort out for the first edition...

...in other news I am actually also going to put in a personal appearance in the film I've been providing content for ..... hope to see some first rushes in June.

There's been a few comments and posts on mesh recently... the rumour going round is that we will have mesh by the end of the month. This is incorrect. We will get an announcement by the end of the month.... and there's various stuff been leaking out, like there's still 400 bugs to fix and that the new mesh will break all old OS meshes.......and etc etc..

Mesh....well, the jury is out. It may eventually be the best thing since Display Names and Voice Morphing.... one thing is pretty sure, however, and that is that SL Viewer 1.23 will not be updated, so...time to try a new one.

....and ... continuing on a techy note started with a recent post of mine, here's another invention to look forward too... the future of broadband ... maybe..... here.

Finally... I love a bit of pure hypocrisy, don't you. This one is a gem. After the recent attempts by the USA government to stop Wikileaks, US government to spend $30 million fighting internet censorship.

You couldn't make it up.