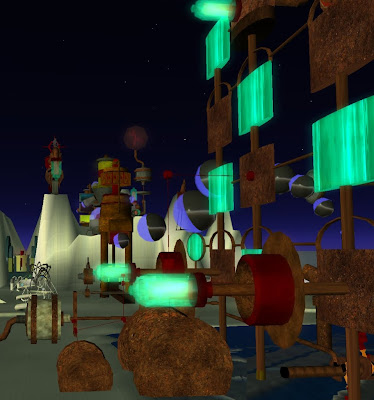 Soup Magoo has been radically transformed from the exotic swampland of my fertile imagination during the last month by Dekka Raymaker and Penumbra Carter to a very different landscape.... 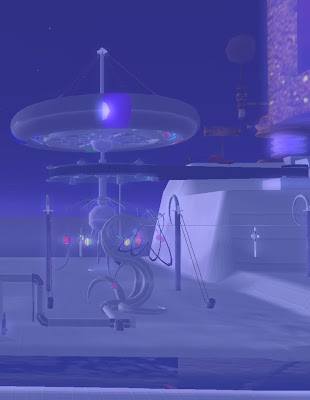 Resembling a Nuclear Punk power station I felt I should have been wearing a robot avi or at least something radio-active... 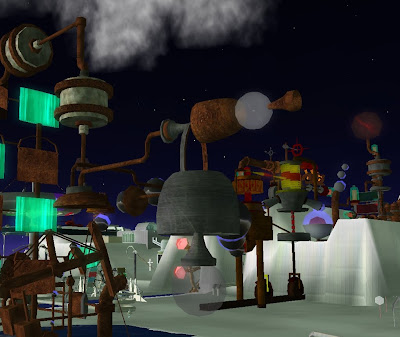 On the Soup website they have the following to say...

"This is a freeform art build. When we were given the homestead at Magoo to produce a piece for it we had no preconceived ideas for it, so we tackled it in a manner that we constructed our Burning Life 2009 collaboration, throw a plywood cube prim down and see where it took us. The resulting madness is what you see.

As the build developed, we wanted to include some avatar interaction, and we wanted the work to come alive around the spectator. We hope that in some way we have achieved that. The build encompasses sound, light and movement. The build is foremost about fun, nothing heavy, no deep meanings, just subconscious energy driving us to complete the build in the first 3 weeks of December (we actually extended into the first week of January too, taking a 8 day break over Christmas week).

While discussing where the build was going we often used words like 'mad', 'scribble', 'no idea', 'sketchbook' and 'wtf are we doing'. There is a visual remark about an upcoming Linden Lab policy to charge L$99 per month for listing 'freebies' on it's Xstreet marketplace (Joke: "when is a freebie not a freebie?" … "when it costs L$99") there seems to be religious overtones too, but there is no bible in here. 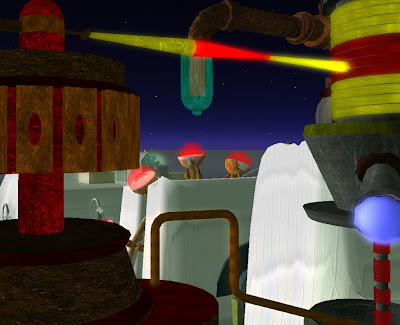 The build is one that does indeed look like a sketch book and shows off their obvious skills both with prim bending and texturing. I did think that if the Lindens every get round to giving us scalable prims, that this build would have benefited from being two or three times the height, I would have liked to have been overshadowed by these things.

The tiling of the terrain texture immediately gives you the feeling of a clinical or laboratory site and the rusting textures contrasting with the neon glows is a great juxtaposition.

It has been a lot of work, you can see that, and worth a visit ... here

...as you know I always try and learn something from stuff I see and had to ask myself again that old question about back-story, theme and would I ever publish my sketch books.... well, it's a tricky one. In one way all I can hope to do as a builder is to provide an environment where things can happen.....) and with 30k sims and 70k avis....it's gonna be sparsely populated)
..or... do I also need to provide more than that?

RMB City left me with a similar feeling... would I go back? Well, I would for a cracking good dance party...

...as for my sketchbooks....well....too much blank paper inbetween the good bits.