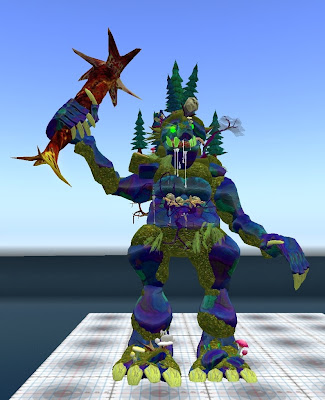 Well, my 423 prim troll is finished and now seen occasionally wandering The Companion. Better photos of it here...or in my Flickr favs....above right.

"The Companion Photo Contest
In the folktale/Storytelling sim The Companion there is a laterna magic. For those of you have been there, I am sure you have seen that this one is empty of images/illustrations/photos/pictures. It is waiting for being embraced by the story. 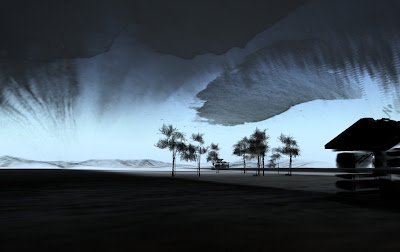 In other news....went to see the build above, China, by aston Leisen, and one of Bettina's picks... I thought the clouds were inspired and the distant mountains done very well. AM used 3 sims to get this feeling of space so it's worth a visit..... here

...otherwise... erm...well, I have been a little slow in blogging this last week, dear reader, but I am starting to prepare for a new show at Pirats. Should open the 5th Jan, if my memory serves me well, which it doesn't......I would go to memory improvement classes but would probably forget which day they were ....as Clement Freud once said.... (more or less..)...."As you get older your memory fails you also as you get older your memory fails you." Not that I have that excuse as it has been terrible all my life, I can't remember most of my childhood, which is probably a blessing..... and I have always made a point of forgetting everyone's name. I need all the spare bioRAM I can muster... no upgrades yet available..... passwords are a nightmare and I have been locked out of more sites than I even care to remember, if I could.

Anyway, it seems like Christmas is happening soon, from the radio and general quantity of snow seen around SL, but I do remember candles melting off the tree in Australia where the Winter Solstice, hijacked by fascist Christians in the North sits unhappily in mid-summer, how surreal is that, really?

It's that time of the year though when religious zealots roam the radio and TV broadcasting their bigoted views with impunity whereas, in the real world (and I use that term relatively) the dusty little donkey, laden with emotive anthropomorphic pathos, wanders into a stall in Bethlehem to be hit by an Israeli anti personnel missile, mistaken for a suspected terrorist..... peace on earth to all (except anyone who disagrees with the current world-view)...

hehehehehe, still as I've said before the great thing about hypocrisy is that you don't have to be consequent; that's a great benefit to those of us who are memory-challenged, and of course, the power crazy.