Now its a case of being steadily bombarded over a good many years with acronyms, 4 million, apparently at this site....so thats a good excuse for my brain just shutting off completely when I see or hear one.
It took me ages to find out things like HUD and UI and stuff like that too, cos my brain just blanks them.

Now I know that BLTA is the British Lawn Tennis Association, because I am a tennis fan...
and I know a BLTC sandwich when I see one..
and LTGB has always been Long-Term Government Bonds, right?
NOOO!!!
I am 4 years out of date cos, LTGB, or LBGT, or, most other combinations of these letters have, according to Wikipedia, meant gay, for the last 4 years...DUH! sorry, no-one told me. I popped over to see Physeter Nicholls show at Gullara Gallery and enjoyed the work he had on show, particularly "face to vase 8" altho I was less impressed with the architecture (nothing new there then) and when I was told it was Northern Scotland where the gales were so severe that the houses were built without eaves, I said "I thought it was Second Life',...... but then I hope that some people realise I am a more severe critic of my own work than other peoples.. and, by the way, it seems to me a poor idea to build a place in SL that people have been abandoning in droves in RL..... houses are really cheap up there....because no-one wants to live there.

Maybe AM Radios next build could be the Arctic.... 4 sims of white ...he could retex his train again, red with a white star...and hey presto.....before you can say Siberianski Russki... he has a new build, with loads of prims spare to build a igloo with each snow particle exactly modelled on "reality".

Anyway...then I popped over to Pixis to see her new tree and we just sat around in her shack exchanging pleasantries.. 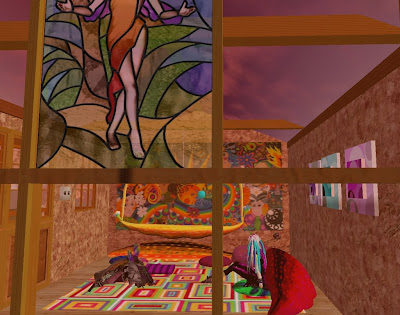 oh, yes, and I thoroughly enjoyed Crap Mariners contribution to the alleged 5 million people who use voice....here....

I guess thats my style of constructive criticism too...