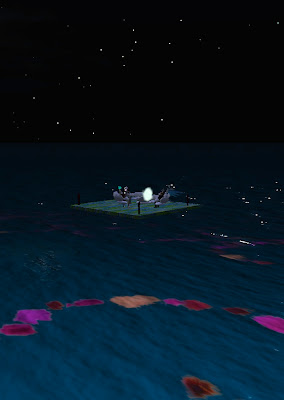 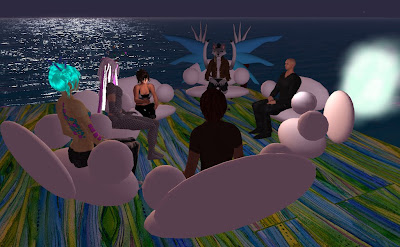 This is an impromptu house warming party that happened on the first night of my island life in InWorldz....

Wizzy, Aliz, Lalo, Zauber, Ed, Juanita, Loopy, Mouser and Scottius (trouble with lists is you get killed if you miss anyone out....) all popped over after I had made my first mega, well, real mega....I stretched my first 256x256 prim thanks to the Imprudence viewer...

Well, I have spent far too long ranting about SLCC and the lies and deception that was spouted there...normally called Hype or Spin, and a part of any company's marketing strategy nowadays....so...some of the other issues that have come to light this week may have passed some readers by like Tweets in the Night.... so....for Busy People...the news in brief..

Emerald viewer has lost a lot of trust this week. Seems like rogue elements on the development team have been inserting bits of code. Zauber thinks infighting will wreck the work before the end of the year in spite of Qarl joining them...this by NWN as a response from the Emerald team.....Tweeters are unconvinced that playing down what happened really helps Emeralds case.

Kitty Viewer...by Katherine Berry is based on Viewer 2.0....you have been warned...it will change your appearance back in time to the last time you used Viewer 2.0.

SnowStorm is a load of b*****ks and neither open nor transparent... and snowglobe isn't even up for discussion...(most things aren't.)...good post by Dusan here..... and for those of a geeky disposition...sprint details here...

Imprudence seems to be the most favoured viewer at the moment....and I am using it in InWorldz.

Linden Lab has lost 100 milllion dollars in valuation nearly 30%) according to analysts, and people who know people say the Vulture Capitalists (some) are wanting their money back which is why 30% of the work force was laid off...no other reason.. It seems like the Myth Of 200 Million Users is now dead...thank the gods...

Business enterprise thingy is dead too...

Meshes...well.. they will happen apparently and I have a bit to say on this....surprising as that may be...:)))

Firstly, NWN, has an illustrated description of how meshes will reduce lag....and I find this very annoying...why?...because this is exactly the same argument that could be used for megas. Megas would reduce lag in exactly the same way, well, not exactly, but the principle would be the same, fewer vertices to place.

In reality, Grace has a far better illustration....my point being that far more people would use megas than mesh....so the effect on lag would be considerable.

Dusan has, as usual the most intelligent post on mesh...but, unfortunately he doesn't run LL or we would all be smiling. The idea of being able to colour meshes inworld would really be revolutionary, and the idea of exporting is immensely sane....but, I'm not holding my breath.

On the Hypergid news...Wizzy, that intrepid explorer, has teleported from Reaction Grid to OSGrid carrying her inventory and avatar shape and clothes with her....this is big news and will be the undoing of SL (and InWorldz) if they turn their backs on this. The future looks, to me, like stand alone home-based grids joined up to the Hypergrid so anyone can come visit you, or go shopping (probably not in SL) and bring their goodies home.


Sunday is another day, it's tomorrow..

I have an opening of my build at UWA very early in the morning for all americans. ...5am SLT.... for normal people (hehehehe) its a civilized time.... that's because Quadrapop Lane and I are showing next to each other, with some pieces by Glyph Graves too.

The SLURL is here.

Eifachfilm Vacirca will be DJing and, if you don't make it, drop in later... it's a busy day in SL (and RL for me) so make an early start...

I will fill you in on what you might like to see on Sunday, hopefully later today.... if I get busy.... Thoth and Selavy are the two good ones, I think..

Email ThisBlogThis!Share to TwitterShare to FacebookShare to Pinterest
Labels: All the latest news.