Well, it's been a week that has seen me locked in the horns of a dilemma concerning SL.

On the negative side... well.....the whole prospect of LL chasing some stupid user number idea thro a comparison with StupidVille and FoolFarm ... and the bean-counters (Miso's words) aiming to flatten SL into a web-experience for fools...that's enough to continue my high degree of mistrust re. the business model that the Boys are following. Then, reading Dale's post concerning how horrible the first hour experience still is in SL...well... that was enough to have me seriously wondering about my planned mega expense, i.e. a computer that could deal with SL demands on it's graphix capabilities.

I did, nearly 3 years ago now, sort of wander into SL on an ordinary laptop, never thinking I would become a "gamer", well... need a gamer's type machine.

My first financial commitment to SL was the purchase of land and some few shares at the Stock Exchange. The value of both shares and land have fallen faster than an escort's panties and I began doubting I would ever recoup the cost of a good machine through the sale of mushrooms. I'd have to sell 20,000 mushrooms to do that, on top of the tier (which is basically bleeding the economy of SL dry). 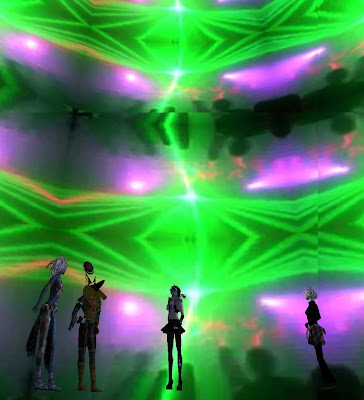 Wizzy had me pop over to see some stuff she and Thoth Jantzen were doing together, and I tped back to Thoth's to see (above) his place... :))

Well, it was just another piece of good art, but, seeing it at that time made me realise something very important. There is no going back.

Lalo also recently talked about culture, something I have been going on about for a while, and I am now pretty sure that, whatever a mess or success the Boys make of SL, there is a group of talented and innovative people who will be creating in 3D for decades to come. Transworlders, these artists will not let the bean-counters rule, they will (we will) simply move somewhere where the 'air' is clean, and building is encouraged and facilitated.

It is a culture, and we will carry that culture with us whatever grid we work on.

So..... I have ordered a new computer capable of running a small hospital (Miso again) and am eagerly awaiting its arrival on the 16th.

It's a heavily discounted Mac Pro, (09) Quad Core with a Nvidia GT120 512, probably the weakest card anyone could ever choose to put in a Pro machine, but, hey... at that discount I can buy a new one.
... and an iiyama 24" screen. So....now, even when I have my invent open and am IMing, I should have enough screen left to see where I'm walking.

My eyesight will also improve no doubt (from the current 64m) so I might even be able to see the sim I'm building... good times ahead....