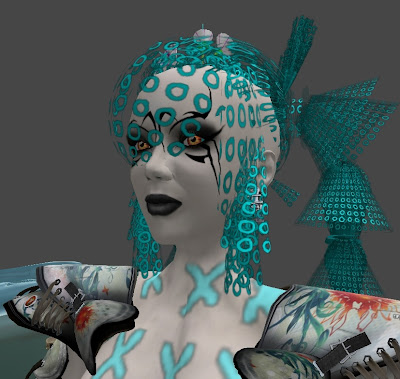 Well, both Botgirl and NPIRL have articles today about art, and I am not gonna add to the general discussion, cos its one of those things, like love, that have already had enough words written about them, although I did comment on botgirls piece. I have bored my regular readers enough with my definition of art.

More interesting for me at the moment is to decide which image to have on my Profile.... its the start of a downward slope if one image is meant to depict you more, or better, than another. Seems like a good idea when you first come to SL, but theres RL thinking behind it.
In RL you cant be a fairy one day and dragon the next.
so.... I have to decide (metaphorically speaking) whether I am more dragon or fairy, or, more accurately speaking, how I would like to present myself to my peers.

I think that, eventually, a series of profile photos of the same person, over the months/years, will be like a biography, a detailed account of how one person would like to be seen.

Men, in SL at least, seem to change their clothes seldom, well, thats my experience anyway, and people who build a lot, like me at times, have more pressing demands on their SL time than to be messing around with their invents.
If you have a major piece of work, like a dragon, or just an avi you like a lot, then obviously you stick with it, you feel comfortable with it: it seems to say something about one part of your personality.

The reason I said its the start of a downhill slope to decide on one image is that its a shame to stop investigating other parts of your unconscious by settling on one SL "personna".