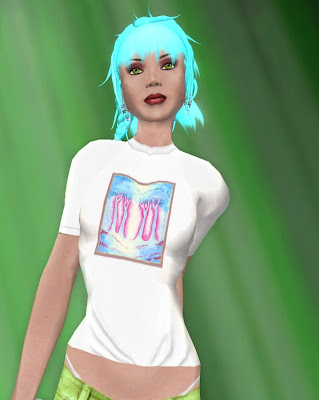 Well, a while back I won a part of the monthly competition at UWA, namely, for best textures, and, as part of their ongoing sponsorship of the arts, UWA in conjunction with etshirts awarded me the prize of a t-shirt printed with one of my own designs.

I chose this one, from a painting I did before I discovered SL, it's called The Glade. 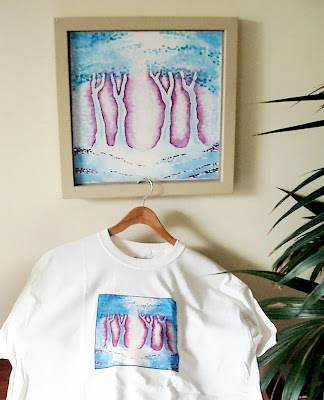 Well, my t-shirt arrived, having been hijacked, I believe by rogue kangaroos who stole the post van, parked up for a month while they drank the postie's tinnies by the side of a billabong before their little marsupial consciences got the better of them and they handed themselves in to the nearest police outpost.

Post is like that, little eddies in the main stream of postal flow sometimes capture the flotsam of our communications and delay it somewhat.... still such a nice surprise when it does arrive. I had a friend who got a post card 8 years after it was posted.

Anyway... this is the RL thing, hanging under the RL painting (for sale..)

If you like it enough to get a copy... you can talk to the nice people at etshirts... here.. and they will make you a soror Nishi T-shirt..... or, one of your own designs.

Now, the more observant among you may notice that it is far too large for my svelte little form, but that's because I am planning on wearing it as bed attire. Not wishing to be a tease, I don't want you to think that is all I wear in bed. I also wear a lunghi (an Indian sarong, worn by about a billion people on the Sub-continent), and bedsocks. They come off when I warm up, the socks that is.

Now, I can feel a small rant coming on against the terribly poor choice available in the shops of cutsie pajamas with teddy bears, fluffy cats and pink hearts, which, in my opinion should never be seen on anyone over the age of 12 and even that may be too old. So...now that is all too much information and may have lowered the tone of this (occasionally) intellectually stimulating blog, but ...well.. [/me thinks of a way to finish this sentence, but gives up as it's Friday and reaches for the glass of wine instead.]